"Our principle of dealing with problems is still to punish all deliberate handball." Faced with the handball rules that no one can explain at present, the law enforcers of the top leagues still tend to punish matches according to this old principle. But with the introduction of VAR, the contradiction between the old principle and the new rule seems to be irreconcilable. 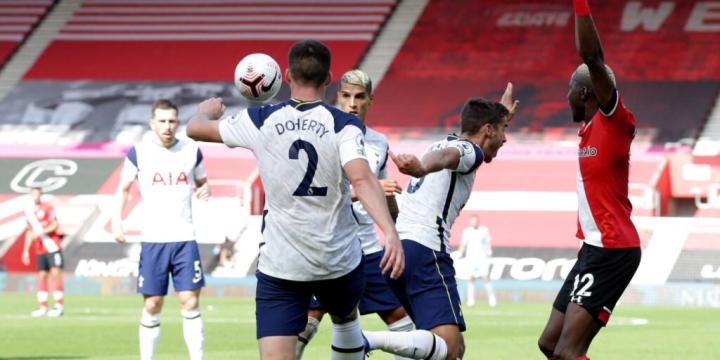 Let us first look at the latest handball rules.

The referees said that the new rules of handball did cause chaos in the game, and the two sides of the game also had a lot of resistance. The referees could only use the old principles as a starting point to try their best to calm down. The referees are facing a lot of pressure, and they also have a hard time talking in the face of outside doubts and overwhelming criticism.

Not long ago, Manchester United’s Lindelof and Tottenham’s Doherty were sentenced to handball fouls. Both teams were also sentenced to penalties. The handball whistled in the new season has caused a lot of criticism and criticism, but we do not Should aim at the referee on duty, assistant referee or video assistant referee, after all, they just follow the rules, the problem lies with the International Football Council (IFAB).

Ellery, the current IFAB technical director, was once a Premier League whistle and once served as the principal of Harrow College, the top public school aristocratic school in the UK. Since 2016, when he became the technical director of IFAB, Ellery has led the modification of more than 100 rules. Including how to kick off in the center line (allowing back pass) and so on.

Some of these modifications are indeed effective. Allowing your own players to stand in the penalty area when the goalkeeper kicks the goal kick will help organize the attack from the backcourt. But the problem is that, no matter if it is players, coaches, referees or fans, not many people approve of the work of IFAB, because the current handball rules are too confusing. "It's a mess," said an insider.

IFAB's current work focuses on "unintentional handball is also considered a foul." Their main argument is that Arsenal challenged Burnley in 2016, and the Gunners defeated the opponent with Koscielny's last-minute handball goal. Although the French central defender's handball was not intentional, this unjustifiable goal directly changed the result of the game. 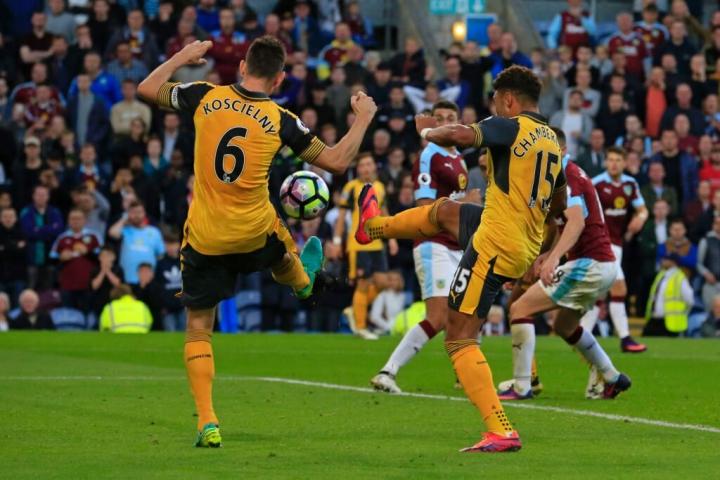 There is a genre in the refereeing circles. They think it would be more reasonable to take the above-mentioned situation separately for judgment, and there is no need to blindly follow any rules. Simply put, no matter whether it is intentional or unintentional, a handball goal shall be invalidated.

But the IFAB is far more extreme, so extreme that it doesn't even need to consider whether it is intentional or unintentional to handball fouls. In the Tottenham game against Southampton, Dougherty was awarded a penalty for a handball in the penalty area. Although this penalty has nothing to do with the outcome of the game (Tottenham was already 5-1 at the time), it is enough to show how stringent the current handball whistle standard has reached.

It can be seen from the animation that the ball first hit Winks' foot and then bounced back to Dougherty, facing the ball close at hand, Dougherty had no chance to dodge the ball. The referee on duty David Kurt did not stop the game at first, but VAR subsequently stepped in. Kurt pointed his finger to the penalty spot after referring to the video playback.

In this regard, the famous whistle Kratenberg believes that according to the new rules, Doherty's handball whistle is no problem: "If a player makes his body "unnaturally expand" when handling the ball, it is a handball foul, and the new rules To put it very clearly, "When the ball touches the head or body (including feet) of a nearby player and then touches the hand or arm of another player, it is also a handball foul for the latter."

Lindelof’s penalty was more controversial and had a greater impact on the course of the game, as Manchester United was 0-1 behind. Although many people think that there is no need for the video assistant referee Moss to let the referee Atkinson refer to the video playback, according to the latest handball rules, we have to say that this penalty is completely compliant because of Lindelof’s arm. Being outside of the body when touching the ball, conforms to the rule of "the player's hands or arms spread out horizontally or vertically away from the body".

To add, the new rules say: The so-called natural position is close to the torso of the body, not the position where it is when it is truly natural. 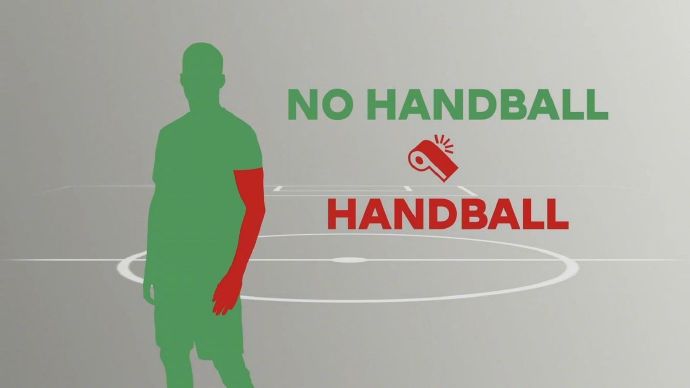 "People say that if the ball hits the sleeve of the short-sleeved shirt, then it should not be whistled for handball. That is not what the new rules say," said an insider. "The new rules say that the arm range covers all areas from the fingertips to the armpits. I think this is clear enough."

If so, Chris Wood, who opened the scoring for Burnley against Leicester City in the second round of the Premier League, should be grateful that he didn't get a penalty kick in his previous handball. Although the ball hit the sleeve of Chris Wood's short-sleeved shirt, it then fell to his upper arm area, so theoretically it was also a handball foul.

It seems that IFAB has made everything too complicated. The penalty rules for handball in each game are now different. The current core question is what consequences will this chaotic situation lead to. In the short term, the number of penalty kicks has risen sharply. Before the second round of the Premier League was finished, 13 penalties had been taken, three of which were due to handball fouls in the penalty area. "There will be as many as 100 penalty kicks in the Premier League this season, many of which will come from handballs in the penalty area, and most of them will be unintentional handballs," said an insider. "The players may deliberately kick the ball on the open arms of the defending player."

For all kinds of chaos, many people, including Crystal Palace coach Hodgson, have a simple idea. He said: "For me, the rules of handball are very simple. When you deliberately use your hand to prevent a goal or gain an advantage, it is Handball. But when the ball hits you, there is nothing you can do. It is not handball." But this seems to run counter to the current IFAB orientation.

This season's handball rules have also undergone major changes on the offensive end-when a player on the offensive side unintentionally handball and then his teammate scores the ball, the goal is effective. In January of this year, West Ham United played against Sheffield United. At the end of the game, the Hammers scored a goal by Snodgrass, which was later invalidated by VAR. The sideline replay showed that Sheffield United defender Egan was playing When Declan Rice was fighting, the ball hit the latter's arm. Although Rice's handball was purely unintentional, the goal was cancelled. 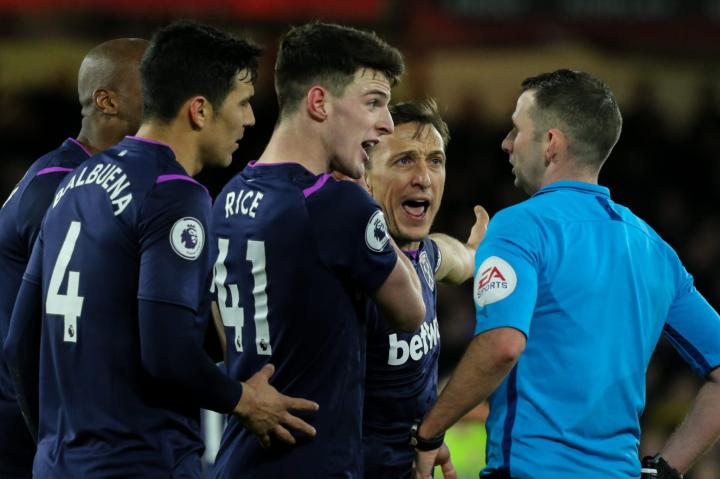 "Although those handballs were not intentional, the goals were cancelled because the offensive team had already handballed before the goal. In response to this situation, IFAB introduced a concept "immediately" this season, that is, if the handball is immediately followed If a goal is scored, the offensive handball foul is called. But then the question arises, what is the scope of "immediate"? Is it one second, two seconds or five seconds? Or is it a pass?"

It seems that IFAB is really self-defeating this time. The controversy and penalties followed one after another, and people were rather helpless about the current situation.

In fact, football matches have become more fair than before, and VAR has corrected many human errors. The focus of the current contradiction is the whistleblowing of handball, and VAR seems to be playing a negative role. Of course, VAR cannot lie. The problem is that the current chaotic rules have brought harm to many people who love the sport. Now someone must stand up to clarify and interpret the new rules.